Alright Harry Potter fans, this one’s for you.

This year, Warner Brothers opened the door to the London studio in which all eight Harry Potter movies were filmed. Visitors now have a chance to explore the sets, props and costumes used in the films, as well as discover the secrets behind their making. 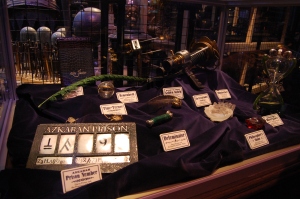 Getting there: Getting to this magical attraction will take awhile. You’ll need to get a round trip (return) ticket to Watford Junction, which will set you back £8-£12, depending on the time of day. The train departs from the Euston Underground Station, and runs approximately every 20 minutes. Once at Watford Junction, you’ll need to catch the Harry Potter Studio Tour coach bus. It runs every 20-30 minutes and costs £2. Make sure you leave early so that if you miss your first coach, you have time to catch a second! The studio is basically out in the middle of nowhere, so the chance of a taxi is slim.

Cost: £28.00 for your ticket, plus approximately £12 for transportation. This is an expensive tour, so make sure you get your money’s worth and look at everything — though this shouldn’t be a problem, as it is quite a sensory overload!